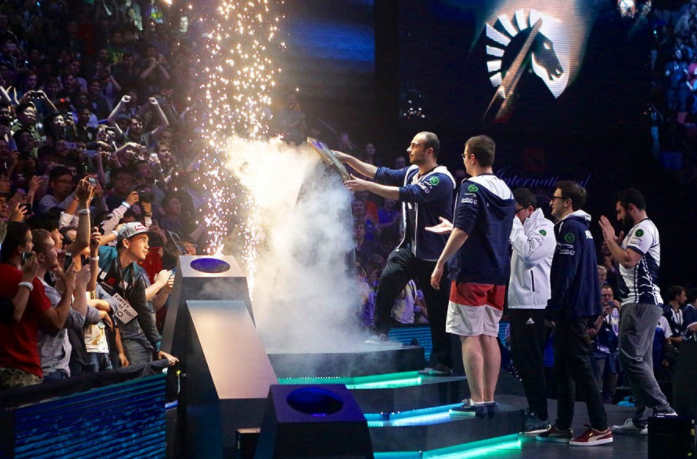 The International 7 is officially completed. Team Liquid, the champions of this year, saved virtually all possible traditions. The Western team won the tournament, and no one managed to take the title twice. Changed only one thing – this time the champions did not give a single map to the opponent.

Final Grid of The International 7

The final day of the event started from the most beautiful match. And this is not the grand-finals. In the finals of the lower grid Team Liquid met LGD.Forever Young. Even Keeper of the Light and Lone Druid that almost destroyed enemy’s base by Solo can not stop the Chinese team. At the third map, Team Liquid lagged behind on 15k gold, but still managed to win the match. Kuroky and his team act like an unstoppable war machine.

The finale was a mere formality. On the first map, Newbee did not even get close to the level of the game of the Team Liquid. On the second cheerfully started, but one mistake brought the advantage to zero. The third card was the most intense. Newbee decided to use their own weapons against Liquid, but if you give Earthshaker to the Maroun “GH” Merhej, then you are already putting your team in jeopardy in mass fights. Two classic battles on Roshan – and Team Liquid become champions of The International 2017.

The team in the playoffs went the longest path out of all possible. They lost in the first round of the top grid to their opponent, whom they chose for themselves. In the series against Team Secret, they were in the one map from the departure from the tournament but were able to turn the meeting over. In the “losers” grid, Team Liquid won 6 games in a row. An incredible way for an incredible championship!

Grand finale, we will remember for a long time, it will be sorted into highlights, but if you compare the two matches of the final day, the first was clearly tenser and more interesting. Three maps, intense struggle, and coups. In trying to win the first game Team Liquid remembered the Alliance’s behests, about the fact that the one who takes down the base wins Dota. In the third map “liquid” were in a pair of unsuccessful decisions from the departure from the tournament. They crushed the opponent, drove him to the base, but for every building they gave too much. Another one or two unsuccessful fights would change the fate of this tournament.

What a wonderful boy! The whole tournament GH and Mind_Control shine, and the main hail of the tournament belong to Amer “Miracle” Al-Barqawi. Yes, by this time Team Liquid has already turned the game in its favor, but the carry, which finds the rune of double damage, survives on 110 health units after the attack of the whole team of the opponent and tearing it to pieces. – this is worthy of the best moment of the final. But if you look closely, you can see that it was still the same Echoslam for a lot of millions of dollars, which did not allow to finish Miracle at the last minute. GH-God?

Well, I can not pass by the moment, which won for Team Liquid third map. Almost the perfect combo in Roshpit – it becomes the classic of The International.

Even if no one remembers this mistake, kpii itself is unlikely to forget it. After the incredible start of the second grand-final map, NewBee lost the initiative and was forced to play defense. Australian off-shooter meet the Necrophos and gave a duel … in the Linken’s Sphere.

There are no weak links in the teams-champions. Each of them played a maximum to achieve this result. Throughout The International, GH set the fashion to active support, did not give life to any opponent. Mind_Control and his blocks on Nature’s Prophet forced Newbee to give him the first ban. Miracle played 21 heroes for the tournament – incredible variation for The International, and Matumbaman showed how different he can be as a carry. But all this is impossible without a man who is now all ready to be called the best drafter and captain this year – Kuro “Kuroky” Salehi Tahasomi. He went to this title for many years. He was at every tournament of the series The International. And this time he raised Aegis over his head, and with it, thousands of fans and spectators cried. The first thing he said after the victory – that next year he wants to return to this scene and again to hold the grand prize in his hands. And you know, Team Liquid has already defended two titles this year. Why not make it a tradition?

What next? | TI7 Grand Finals

The International 7 is over. And immediately it was somehow empty on a soul. But we still have something to talk about. During the week we will discuss the results of the tournament, follow the path of the best teams and prepare for the hottest time in Dota 2 – the main transfer window. Ahead there are a lot of major and minor events, reshuffles and endless surprises of the Dota scene. Welcome to the new season!

p.s. According to the portal TrackDota, simultaneously on the broadcasts of The International 7 gathered more than 4.8 million viewers.